March Madness and the Road to Retirement 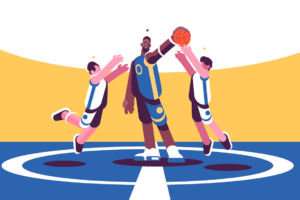 tournament to decide the top college basketball team in the country is so exciting, with smaller schools often staging upsets over larger rivals in these single elimination contests, that the tournament has come to be referred to as “March Madness.”

But chance isn’t only a factor in sports. Chance also comes into play on the road to retirement. Millions of workers reluctantly borrow from their retirement plans every year to meet unexpected financial needs, taking advantage of payroll deduction repayments and much lower rates than they might find in consumer loan markets, provided they even qualify. But chance doesn’t stop there. The CNN Money calculator assumes 40 years of uninterrupted work. Yet the Department of Labor (DOL) reported more than 20 million workers were discharged last year alone[1], losing their jobs to layoffs or other factors outside their control, such as injuries, during the strongest job market on record. It is when these two chances come together that people stop winning at retirement.